The Fair Grounds is an artistic project by the Dutch new media art collective DROPSTUFF MEDIA. The Fair Grounds consists of multiple independent installations where traditional amusement rides have been updated with new artistic or social narratives. The result is a truly new fairground where every ride has been modified or enhanced and tells a surprising story in the public space: folk culture meets high tech and high art!

For instance, take a ride on The Fair Grounds 1.0, a virtual reality rollercoaster ride using 6 converted kiddy rides. Take a spin in the augmented reality carousel of Carnaval des Moutons, a merry-go-round ode to the zoetrope. Or hop into the self driving bumper cars of Bumper Ballet and experience the difference and similarities between bumping & dancing.

A new media fairground for everyone

The Fair Grounds aims to combine the rich history of traditional fairgrounds with modern day technology and innovation to create a place where once again new insights and stories are being presented to a broad audience. Historically, fairgrounds and travelling fairs have always been the ‘unwritten portion of the story of the people’. Fairgrounds and the arts are both ways of storytelling that evoke wonderment in traditionally different target groups. By combining these worlds, The Fair Grounds creates a broader, more inclusive place where rapid technological, social and creative changes become accessible to an audience that does not necessarily have access to it.

To reach this goal, we team up with existing fairgrounds but also artists, designers, museums and cultural institutions. We use a combination of new and social media, virtual and augmented reality, artificial intelligence, 360° and 3D video, drones, robots, projection, cameras, sensors, self-driving cars and other applications, but also more traditional media such as theatre, photography and physical (art)objects.

Coming soon to a festival near you

Just like a traditional fair, The Fair Grounds functions as an international travelling project. It crosses both borders and boundaries by visiting high-art cultural events like the Venice Biennale as well as traditional fairgrounds and local festivities. Kicking off its running tour in 2018, the project has since visited festivals in France, Austria, Germany as well as its origin country of The Netherlands. It has won multiple awards, including the NICE Award, a European prize for social innovation. In 2020, The Fair Grounds has been selected to exhibit at the prestigious American SXSW 2020 Art Program.
Are you interested in having one, several or all of the installations of The Fair Grounds at your festival, event, congress or meeting? Do not hesitate to contact us for more information. You can send us an e-mail at info@dropstuff.nl, give us a call at +31 (0) 35 677 19 12 or use this contact form

The Fair Grounds is an artistic project by new media art collective DROPSTUFF MEDIA. The project builds a collection of artworks where amusement rides are presented as art installations. New narratives have been added to fairground attractions as well as to old forms of folk culture. Each ride has been updated with rich stories of cultural heritage, the imagination of the arts and the wonderment of new technologies. The result is a truly new fairground where every ride has been modified, enhanced and now tells a surprising story to a mix of generations: folk culture meets high tech and high art!

Winner of the NICE Award 2019 – european centre for creative economy

Finalist of the SXSW 2020 Art Program

Minister of Education, Culture and Science Jet Bussemaker at the presentation of ‘The Fair Grounds 1.0’ in Venice, Italy 2017 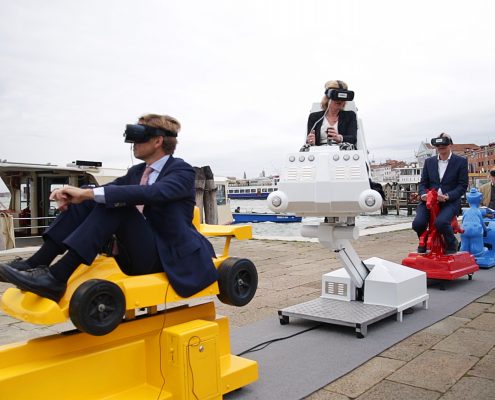 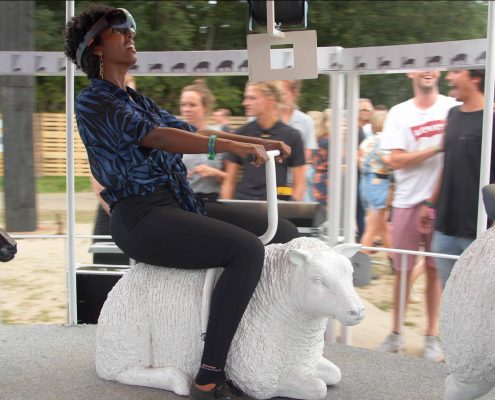 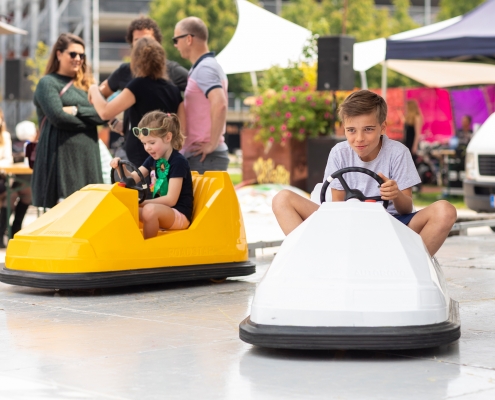 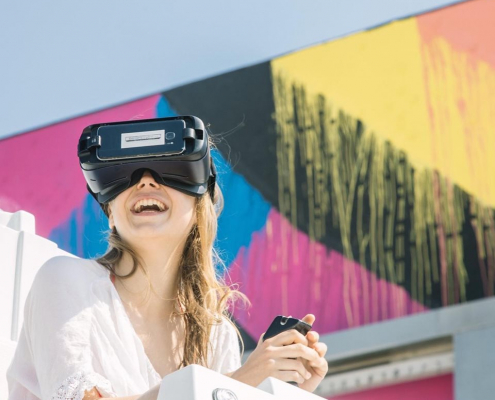 ‘Time Travellers’ presented at the Netherlands Institute for Sound and Vision, september 2018 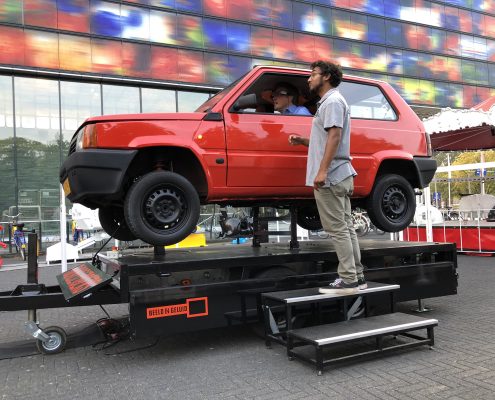 The following installations of The Fair Grounds have been realised:

Because these cookies are strictly necessary to deliver the website, refuseing them will have impact how our site functions. You always can block or delete cookies by changing your browser settings and force blocking all cookies on this website. But this will always prompt you to accept/refuse cookies when revisiting our site.